The biggest postcard together with ESN VGTU

On the 24th - 25th of November representatives of ESN VGTU together with charity and support fund "Mother Union" participated in the exhibition "Vaikų šalis 2012" (eng. "Children Country 2012") which was held in exhibition hall LITEXPO, Vilnius and joined the opportunity to create the biggest postcard in Lithuania. The result was amazing, because there was created as postcard which height - 2,4 m and width - 1,5 m. 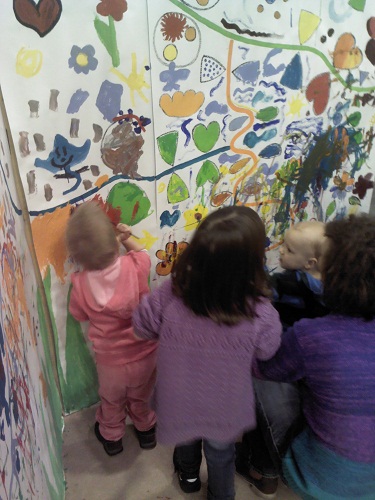 It all started on Saturday early morning when the base of the postcard was delivered - the size of it took breath for everyone who saw it as it was quite hard to imagine how we will manage to fulfill all white area with drawings and pictures. However, when the professional designer began to sketch the Goodness of a Brownie smallest participants of the exhibition bravely joined the company. Firstly they timidly colored the figures, but after some time started to improvise - then flowers became black, there were animals in the sky... The imagination was freed. Everybody who joined the creation of this postcard got a piece of cake. The most interesting thing was to see how this opportunity to remember the childhood and to take a paintbrush involved also adults. Persistently, till the end of the exhibition, they demonstrated their painting abilities while their children were helping them.

Nearby the members of the "Mother Union" introduced the new collection of the postcards. The passers - by had an a opportunity to buy them and support children with cancer.

On Sunday action continued as the postcard was only on a halfway. Professional designer again helped us an organized fast, effective workshop to finish the record on time. After finishing many people wanted to have the photo IN it. 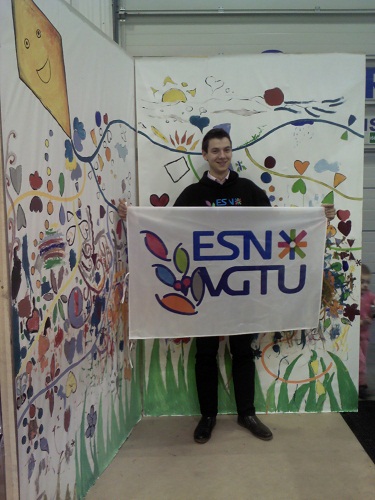 On Monday morning the postcard was delivered to Santariškių hospital and was gifted to the department of Children Oncological Diseases where decorates the hallway.

This project was not the first one organized between ESN VGTU and "Mother Union" - at 2011 winter members of ESN VGTU together with foreigners visited the hospital and performed Christmas event, at 2012 spring ESN VGTU also participated in Saint Casimir's fair, where fundraised charity for children with cancer. According to the ESN VGTU Alumni Julius Zaburas - "support and aid not necessarily must be expressed financially. Sometimes exact work, as this time producing and delivering the base for biggest postcard means much more than money".